Netta Barzilai of Israel wins Eurovision with a chicken dance 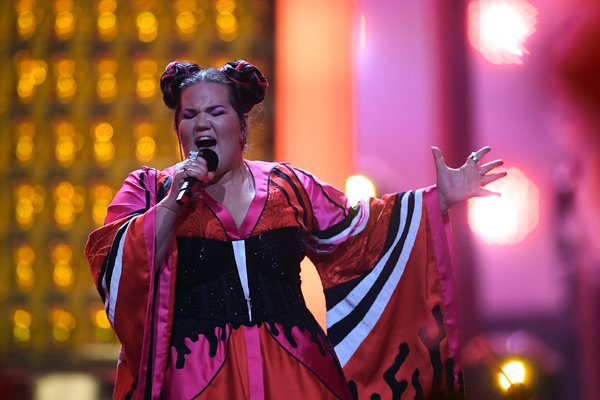 Denmark featured singing Vikings, Ukraine’s contestant rose from a coffin to play on an enormous flame-wreathed piano, and an Estonian opera singer performed in a gown 26 feet in diameter.

But it was the Israeli singer Netta Barzilai who won the Eurovision Song Contest in Lisbon on Saturday with “Toy,” a pop anthem about female independence, accompanied by her signature chicken dance.

In a glittery corset and kimono, Ms. Barzilai, 25, took the stage singing, “I’m not your toy, you stupid boy,” interspersing the verses with arm flaps, beatboxing and chicken noises. The song was “influenced by the #MeToo movement,” Ms. Barzilai said in an interview after a semifinal this week. “Look, it’s an amazing time when women are searching for and finding their voices.”The contest’s close runner-up was the Greek-Albanian star Eleni Foureira, who represented Cyprus with “Fuego,” a club-friendly pop anthem. “Take a dive into my eyes / Yeah, the eyes of a lioness,” sang Ms. Foureira, whipping her hair and twirling in a sequined bodysuit.

“Fuego” is about “the power of women,” Ms. Foureira said in an interview before the final. “Nothing can put you down. So you need to just go up and fly, fly, fly,” she added, echoing her song’s lyrics.

Cesár Sampson of Austria finished in a surprising third place with his comparatively mellow pop song “Nobody but You.”

A carnival of high camp, Eurovision draws some 200 million viewers each year. Most winners do not go on to global fame — notable exceptions are Celine Dion, who represented Switzerland in 1988, and Abba, who sang for Sweden in 1974 — but they can still command a passionate cult following.

Winners are determined through a combination of juries and viewer votes, and each competition is hosted in the home country of the previous winner. (Salvador Sobral of Portugal won in 2017 with his ballad “Amar Pelos Dois.”)

This year, 43 entrants were whittled down into 26 finalists, who performed at Altice Arena in Lisbon. The contest is open to members of the European Broadcasting Union, which includes countries across Europe as well as Israel and Australia.

The evening’s most unexpected moment came when a man rushed onstage and grabbed the microphone from the British singer SuRie, shouting into it briefly before security dragged him off. Graham Norton, the BBC’s on-air commentator, announced that the man was in police custody.

Offered the chance to perform again, SuRie declined, according to a statement from a BBC spokeswoman: “SuRie and her team are extremely proud of her performance and have together decided that there is absolutely no reason to perform the song again.”

The European Broadcasting Union forbids politically tinged performances, but politics tend to follow the competition nonetheless. Last year, Russia dropped out because of a continuing tensions with the host country, Ukraine.

This year, China did not show the contest after a Chinese broadcaster censored the semifinal performance of Ireland’s Ryan O’Shaughnessy, which showed two men dancing with each other to his ballad “Together.” In response, the European Broadcasting Union banned the channel, Mango TV, from broadcasting the second semifinal and final, saying in a statement that the censorship was “not in line” with its “values of universality and inclusivity.”

The sound effects in “Toy,” the song that won this year’s contest, have their origins in Ms. Barzilai’s childhood.

The beatboxing, she said, came from being bullied: “I was fat, and I was teased, and I had to find my thing.” And the chicken noises represent how bullying is about fear: “Fear of something different. Fear of somebody taking your place.”

Ms. Barzilai said she previously felt pressured to perform in the soulful voice of Adele or Aretha Franklin — “to stand as a diva, cover myself with black clothes and spread my arms and sing out of my heart” — because audiences could not imagine a “big, funny pop star.” That is why, she said, “a star of my size looking like me and sounding like me is groundbreaking in Israel.”

“I’m so happy,” said Ms. Barzilai as she took the stage after she won. “Thank you so much for accepting differences between us. Thank you for celebrating diversity. Next time in Jerusalem.”