Me too. I complied with Hamas censorship 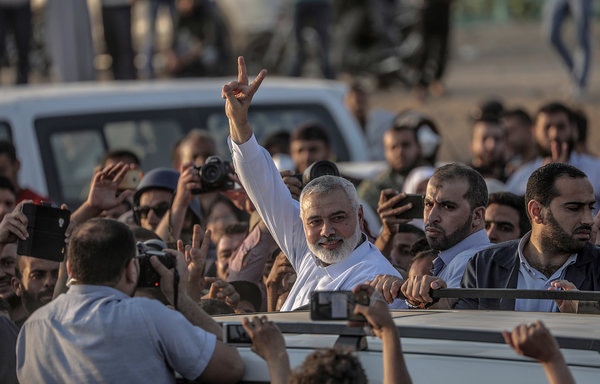 Sheikh Ismaeil Haneiya of Hamas flashed the victory sign on Tuesday near the border with Israel in the east of the Gaza Strip. Scores of demonstrators had been killed by Israeli soldiers the day before.CreditMohammed Saber/European Pressphoto Agency, via Shutterstock

JERUSALEM — During my years in the international press here in Israel, long before the bloody events of this week, I came to respect Hamas for its keen ability to tell a story.

At the end of 2008 I was a desk editor, a local hire in The Associated Press’s Jerusalem bureau, during the first serious round of violence in Gaza after Hamas took it over the year before. That conflict was grimly similar to the American campaign in Iraq, in which a modern military fought in crowded urban confines against fighters concealed among civilians. Hamas understood early that the civilian death toll was driving international outrage at Israel, and that this, not I.E.D.s or ambushes, was the most important weapon in its arsenal.

Early in that war, I complied with Hamas censorship in the form of a threat to one of our Gaza reporters and cut a key detail from an article: that Hamas fighters were disguised as civilians and were being counted as civilians in the death toll. The bureau chief later wrote that printing the truth after the threat to the reporter would have meant “jeopardizing his life.” Nonetheless, we used that same casualty toll throughout the conflict and never mentioned the manipulation.

Hamas understood that Western news outlets wanted a simple story about villains and victims and would stick to that script, whether because of ideological sympathy, coercion or ignorance. The press could be trusted to present dead human beings not as victims of the terrorist group that controls their lives, or of a tragic confluence of events, but of an unwarranted Israeli slaughter. The willingness of reporters to cooperate with that script gave Hamas the incentive to keep using it.

The next step in the evolution of this tactic was visible in Monday’s awful events. If the most effective weapon in a military campaign is pictures of civilian casualties, Hamas seems to have concluded, there’s no need for a campaign at all. All you need to do is get people killed on camera. The way to do this in Gaza, in the absence of any Israeli soldiers inside the territory, is to try to cross the Israeli border, which everyone understands is defended with lethal force and is easy to film.

About 40,000 people answered a call to show up. Many of them, some armed, rushed the border fence. Many Israelis, myself included, were horrified to see the number of fatalities reach 60.

Most Western viewers experienced these events through a visual storytelling tool: a split screen. On one side was the opening of the American embassy in Jerusalem in the presence of Ivanka Trump, evangelical Christian allies of the White House and Israel’s current political leadership — an event many here found curious and distant from our national life. On the other side was the terrible violence in the desperately poor and isolated territory. The juxtaposition was disturbing.

The attempts to breach the Gaza fence, which Palestinians call the March of Return, began in March and have the stated goal of erasing the border as a step toward erasing Israel. A central organizer, the Hamas leader Yehya Sinwar, exhorted participants on camera in Arabic to “tear out the hearts” of Israelis. But on Monday the enterprise was rebranded as a protest against the embassy opening, with which it was meticulously timed to coincide. The split screen, and the idea that people were dying in Gaza because of Donald Trump, was what Hamas was looking for.

The press coverage on Monday was a major Hamas success in a war whose battlefield isn’t really Gaza, but the brains of foreign audiences.

Israeli soldiers facing Gaza have no good choices. They can warn people off with tear gas or rubber bullets, which are often inaccurate and ineffective, and if that doesn’t work, they can use live fire. Or they can hold their fire to spare lives and allow a breach, in which case thousands of people will surge into Israel, some of whom — the soldiers won’t know which — will be armed fighters. (On Wednesday a Hamas leader, Salah Bardawil, told a Hamas TV station that 50 of the dead were Hamas members. The militant group Islamic Jihad claimed three others.) If such a breach occurs, the death toll will be higher. And Hamas’s tactic, having proved itself, would likely be repeated by Israel’s enemies on its borders with Syria and Lebanon.

Knowledgeable people can debate the best way to deal with this threat. Could a different response have reduced the death toll? Or would a more aggressive response deter further actions of this kind and save lives in the long run? What are the open-fire orders on the India-Pakistan border, for example? Is there something Israel could have done to defuse things beforehand?

These are good questions. But anyone following the response abroad saw that this wasn’t what was being discussed. As is often the case where Israel is concerned, things quickly became hysterical and divorced from the events themselves. Turkey’s president called it “genocide.” A writer for The New Yorker took the opportunity to tweet some of her thoughts about “whiteness and Zionism,” part of an odd trend that reads America’s racial and social problems into a Middle Eastern society 6,000 miles away. The sicknesses of the social media age — the disdain for expertise and the idea that other people are not just wrong but villainous — have crept into the worldview of people who should know better.