Blocked in a car by a mob, kept from their HQ: Why UNRWA staff had to flee Gaza

Angry crowds have stopped staff from getting to work for days, says agency’s Gaza chief, but it got worse when ‘threatening’ protesters surrounded a car with 5 employees 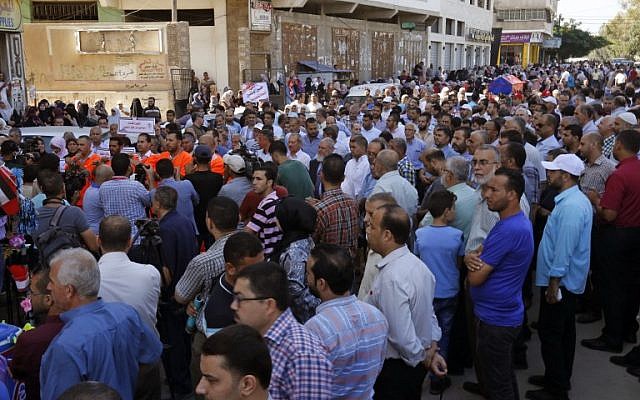 The emergency evacuation of nine foreign employees of UNRWA from Gaza to Israel on Monday was necessitated after Palestinian protesters surrounded and blocked a car containing UNRWA officials for an hour that day in a “threatening” and “dangerous” confrontation, the head of the agency’s operations in the coastal enclave told The Times of Israel.

Furthermore, he said, a crowd of Gazans mobilized by the UNRWA employees’ union have prevented some 300 employees of the Palestinian refugee agency from accessing their offices at the organization’s Gaza headquarters for eight of the last ten days, and have made “serious” threats against senior staffers.

Matthias Schmale described what had become an untenable situation for many employees of the United Nations Relief and Works Agency, the UN body tasked with aiding Palestinian refugees, in a telephone interview late Tuesday from Gaza, where he and a reduced overseas team remain for the time being.

“The UNRWA employees’ union in Gaza has been protesting the dismissals and other changes we made last month by blocking our access to our offices. We have only been able to enter them two out of the past ten days,” he said. “I understand the frustration of the people who have lost jobs or been moved from full to part-time work, but we need to be able to function and do our jobs.”

Schmale said employees were only able to enter their offices on those two days because the union “gave some breathing space to see if there was any possibility of starting a dialogue” with agency officials. 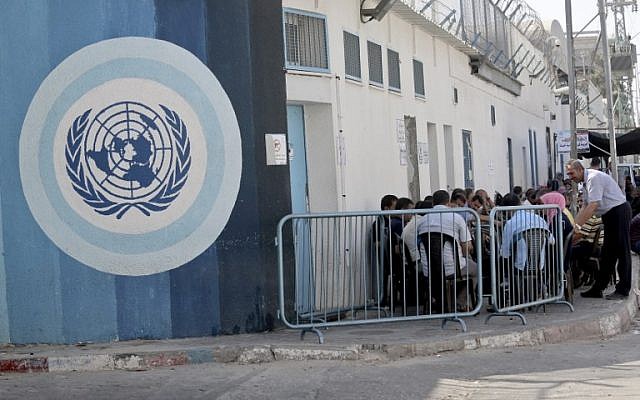 Palestinian employees of the United Nations Relief and Works Agency (UNRWA) take part in a sit in, in front of the agency’s headquarters in Gaza City on October 2, 2018, to protest against job cuts announced by UNRWA. (AFP PHOTO / SAID KHATIB)

In July, UNRWA announced that it was laying off 113 employees in Gaza and offering 584 full-time workers there part-time jobs.

UNRWA has been facing a major funding shortfall in large part because US President Donald Trump’s administration has given it far less money than previous American administrations. Since the start of 2018, the US government has only sent $60 million to the agency; in 2017, the US gave $364 million. Last month, the US administration announced it would stop funding the UN body altogether, calling it “irredeemably flawed.”

The UNRWA employees’ union in Gaza has firmly opposed the UN agency’s decisions to lay off some of its workers and move others to part-time jobs. It has also organized a number of rallies and called for strikes in UNRWA institutions in the Hamas-run coastal enclave.

Amir al-Mishal, the head of the UNRWA employees’ union, told Al-Ghad TV, a London-based Arabic news channel, on Wednesday that additional “escalatory steps” will be announced against UNRWA’s leadership in Gaza on Thursday at a press conference. He did not say what the steps would include.

Schmale said that while the protesters blocking the entrance to UNRWA’s headquarters was unacceptable for him, it was a “dangerous” incident at the Al Deira Hotel adjacent to Gaza’s coast on Monday that led to the evacuation of the nine foreign UNRWA employees. Israeli authorities opened the Erez crossing point into Israel, which was closed for the Sukkot holiday, especially for them. 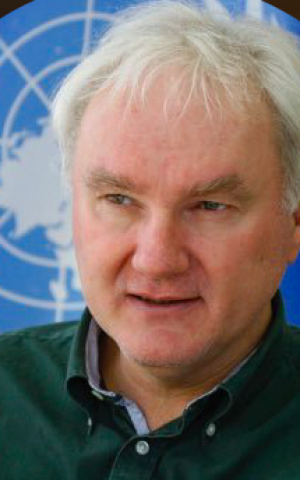 “I was meeting with some of my female managers at a hotel in Gaza City when my security people informed me a group of protesters from the union had been gathering outside,” he said. “We immediately collected our belongings and left the hotel. All of our cars made it out the hotel’s premises except for one, with five of our employees, which the protesters surrounded.

“The [Hamas] police later arrived and after an hour opened a pathway for the car to leave,” he said. “This was a threatening and serious situation. It triggered us to do what we had been thinking about, which was basically to send non-essential staff to another safer location and give the authorities here, if I can say that, a clear message that they need to protect a UN organization and ensure we can access our office space and not be chased around Gaza.”

Non-essential staff refers to UNRWA employees who do not necessarily need to be in Gaza to do their work, such as persons in jobs related to finance or donor relations.

On days that UNRWA employees have not been able to access their offices in the UN agency’s headquarters in Gaza, they have been working remotely and holding staff meetings in various locations around the Strip like the Al Deira Hotel.

Schmale said after the incident on Monday he called the Coordinator of Government Activities in the Territories, the branch of the Defense Ministry responsible for liaising with the Palestinians and international organizations in Gaza, and asked for special permission to evacuate the nine UNRWA employees.

“We actually have good pragmatic working relationships with COGAT and they swiftly approved our request to send the employees out of Gaza,” he said.

On Monday, the Erez crossing, where the UNRWA employees exited Gaza, was closed except for what COGAT calls “humanitarian cases” as Israel observed the Sukkot holiday.

Most of the employees who were evacuated started working from UNRWA’s offices in Jerusalem on Tuesday, Schmale said.

In an emailed statement, COGAT confirmed foreign UNRWA employees were evacuated to Israel. It said the workers were pulled out of Gaza in light of “the tension in the Strip that has been caused by UNRWA’s financial crisis and out of fear for the safety of international workers.”

Asked if UNRWA employees in Gaza had faced death threats, Schmale said that members of the UNRWA employees’ union had not explicitly threatened to kill him or other members of the agency’s staff, but that some of them have “made comments of which the implication was very clear that they are threatening serious action in that direction.” 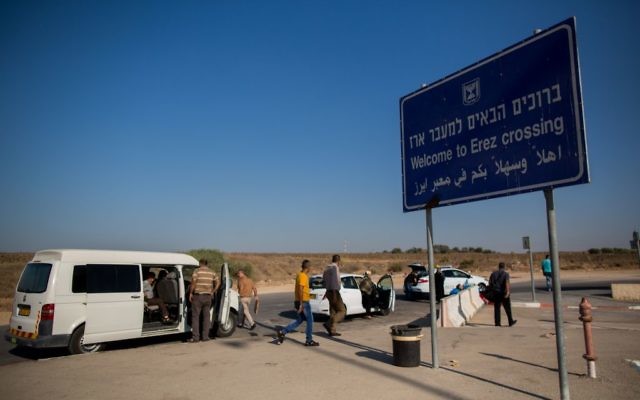 Illustrative: Palestinians prepare to cross from Israel into the Gaza Strip at the Erez Crossing, September 3, 2015. (Yonatan Sindel/Flash90)

All foreign UNRWA employees in Gaza reside in homes that UN security teams have deemed safe.

UNRWA employs some 13,000 Palestinians in Gaza who provide health, education, welfare and other services to 1.3 million Palestinians it has registered as refugees. Before Monday, there were approximately 19 international UNRWA employees based in the Strip.

Schmale also said he does not know when UNRWA will be able to bring the nine workers it evacuated back to Gaza.

“I do not know when it will be possible, but our condition for them to return is to have access to our offices and the ability to function,” he said. “The proof in the pudding lies in the eating. Even today after we evacuated the workers, we still were not able to access our offices. The local authorities still have not moved to make sure we can enter them.”

An official in the Hamas-run security services did not respond to a request for comment.

Asked if UNRWA could rehire the workers it laid off and provide more work for the employees it transferred to part time jobs, Schmale said that the organization would first need to raise funds to make up for its budget shortfall and then gather additional money to pay for new staff.

He said if that is achieved, UNRWA would be able to rehire employees who were laid off or moved to part-time jobs, if they meet the qualifications for jobs the UN agency needs filled.

At a meeting on the sidelines of the annual meeting of the UN General Assembly last Thursday, several international parties collectively pledged to send an additional $118 million to UNRWA.

The remaining shortfall in UNRWA’s budget for 2018 stands at $68 million, according to Pierre Krahenbuhl, the UNRWA commissioner-general.

For many Palestinians, finding work in Gaza is an arduous task. The current unemployment rate stands at some 43 percent, according to the Palestinian Authority Central Bureau of Statistics.