Lord Sugar has vowed to quit Britain if Jeremy Corbyn becomes Prime Minister - taking his huge tax bills with him. 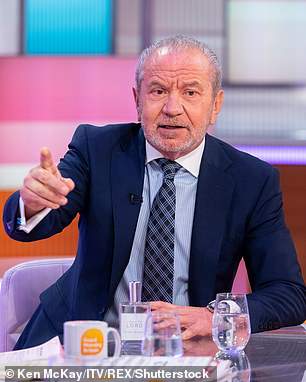 Jeremy, you're fired: The Apprentice star, who quit the Labour Party in 2015 over its 'negative' approach to business, has repeatedly attacked Mr Corbyn. He is pictured on Good Morning Britain yesterday

The Apprentice star, who quit the Labour Party in 2015 over its 'negative' approach to business, has repeatedly attacked Mr Corbyn for his economic policies and lax approach to the anti-Semitism crisis.

'Corbyn, if he gets in I'm out. That's for sure,' the 71-year-old business mogul vowed in a newspaper interview.

Lord Sugar was a Labour member for 18 years and became one of the party's biggest donors.

He is now an independent peer in the House of Lords, where he continues to be outspoken on Mr Corbyn, especially about his approach to the anti-Semitism crisis.

In March, he tweeted a mock-up of the Labour leader in a car alongside Adolph Hitler. He said the post was a 'joke' before later deleting it.

A month later, he called Mr Corbyn 'absolutely dangerous' amid criticism of his attendance at an event organised by a far-left group that once called for Israel's destruction.

And in September, he doubled down his criticism of Mr Corbyn's conduct, saying he doesn't believe Mr Corbyn has the desire to 'grab Labour by the scruff of the neck' over the scandal.

Lord Sugar backed Remain in the referendum, having warned about the economic impacts of Brexit.

But he sympathises with Theresa May over the Brexit negotiations, saying: 'She's got a tough job. I think she's doing as best she can under the circumstances.' 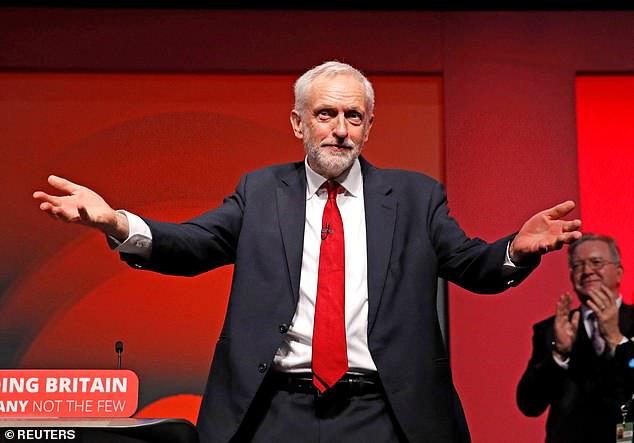 The business mogul has been particularly critical of Mr Corbyn's approach to the anti-Semitism crisis. The Labour leader is pictured at the party conference on September 26

The business mogul will appear at 9pm tonight on BBC1 for the new series of The Apprentice.

It was embroiled in controversy this week after it emerged contestant Daniel Elahi was allegedly caught with cannabis worth about £5,000 he was hoping to sell to students.

The 28-year-old has hidden the fact that he admitted intent to supply cannabis after police caught him with his stash.

Friends of Elahi - who stopped using his real first name, Gareth, after a trial concerning the offence, told The Sun that they couldn't believe he got through checks carried out for the hit BBC show.