British taxpayers are still funding ‘lessons in hate’ at Palestinian schools more than a year after ministers were told they could be inciting violence against Israel.

It emerged last year that the Department for International Development has helped pay the salaries of officials who drew up a new curriculum that teaches children the virtues of becoming a jihadi.

Plays put on at schools and summer camps have even included pupils staging mock executions.

One in Hebron featured a child draped in Palestinian colours ‘shooting’ another dressed as an Israeli soldier. 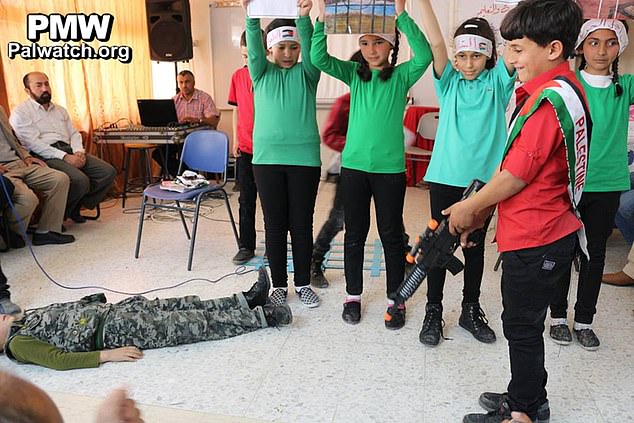 Staged execution: One in Hebron featured a child draped in Palestinian colours ‘shooting’ another dressed as an Israeli soldier

Textbooks teach five-year-olds the words for ‘martyr’ and ‘attack’, while teenagers are told that those who sacrifice themselves will be rewarded with ‘72 virgin brides in paradise’.

But despite promises earlier this year that the curriculum would be reviewed, the books are still being used by the ministry of education on the West Bank, activists revealed.

Joan Ryan MP, chairman of the Labour Friends of Israel, said aid to the Palestinian Authority, which governs the West Bank, should be suspended until the books are removed.

‘It is absolutely appalling that the Palestinian Authority is using British taxpayers’ money to teach these lessons in hate,’ she said. ‘I simply cannot understand why ministers have spent over a year dragging their feet, coming up with excuses for the Palestinian Authority, and allowing this to continue. ‘They need to get a grip and suspend the money we pay to the ministry of education until we have a cast iron guarantee this vile content has been removed once and for all.’

Britain is giving the Palestinian Authority £70million in the current financial year and some of this is being used to help pay the salaries of 33,000 teachers and education officials in the West Bank.

In the spring, Foreign Office minister Alistair Burt admitted that these officials were ‘involved in the implementation process’ for the revised curriculum. 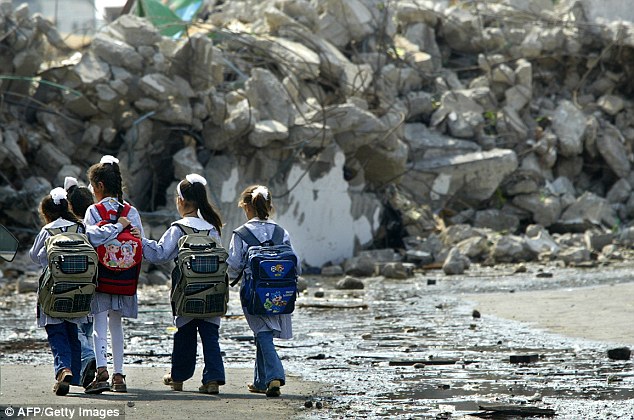 Textbooks teach five-year-olds the words for ‘martyr’ and ‘attack’, while teenagers are told that those who sacrifice themselves will be rewarded with ‘72 virgin brides in paradise’. Stock image

The school books, which were introduced in September 2017, teach ten-year-olds that ‘drinking the cup of bitterness with glory is much sweeter than a pleasant long life accompanied by humiliation’.

Terrorists – including Dalal Mughrabi, who led the 1978 ‘Coastal Road Massacre’ in which 38 Israelis including 13 children were murdered on a bus – are described as ‘heroes’.

The books also contain violent poems which extol the virtues of ‘sacrificing blood’.

Miss Ryan first raised the issue of the textbooks with Mr Burt in September 2017.

In March, Theresa May promised a review of the curriculum, pledging that it would only ‘take several months’.

Mr Burt later said he would establish a review which would not report until September 2019. This review has still not been commissioned.

But research by the Institute for Monitoring Peace and Cultural Tolerance in School Education shows that there have been no major changes in the school year that began this September.

The Department for International Development said: ‘We have always been clear that we expect textbooks used by the Palestinian Authority to be academically rigorous and they must not incite racial hatred or violence under any circumstances. We will continue to raise our concerns about incitement.’