Thanks to Trump, diplomatic taboo around Western Wall comes tumbling down 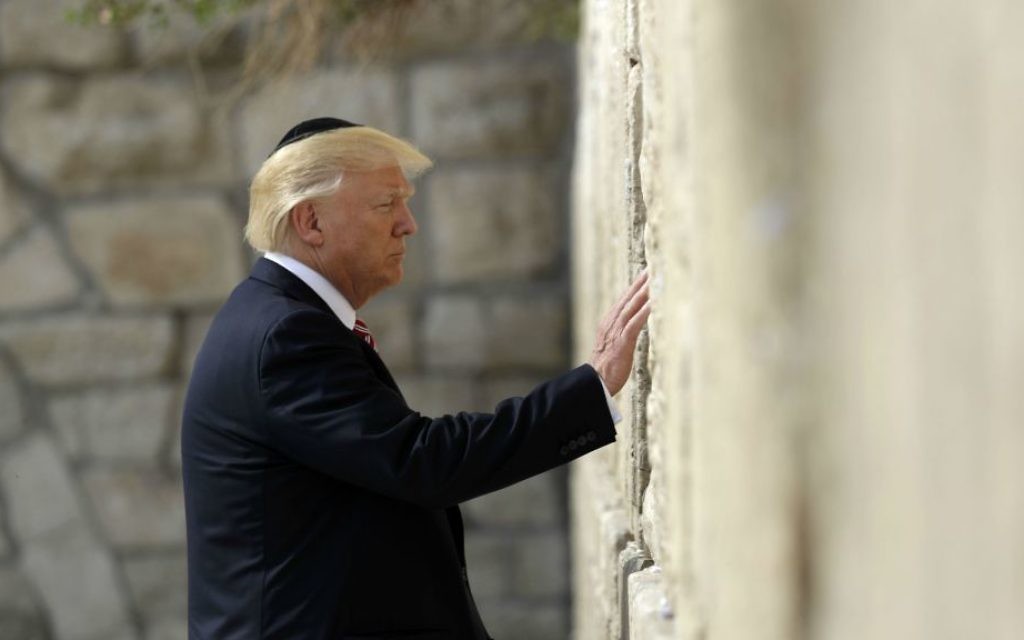 On May 22, 2017, Donald Trump became the first sitting US president to visit the Western Wall. “Words fail to capture the experience,” he said a few hours later. “It will leave an impression on me forever.”

The historic visit took place several months before Trump formally recognized Jerusalem as Israel’s capital, and, following what was standard diplomatic protocol at the time — and, to some degree, still is — the stopover at the Wall was billed as “private.”

Like all foreign leaders who went to the site before him, Trump was unaccompanied by high-ranking Israeli officials, lest anyone misinterpret their presence as a tacit recognition of Israeli sovereignty over the city’s disputed eastern section.

According to a well-placed source, American officials were worried that Prime Minister Benjamin Netanyahu, who had escorted Trump on every previous stop of his Israel trip, would unexpectedly appear at the Western Wall as well.

Netanyahu didn’t do so, however, respecting the time-honored diplomatic tradition under which foreign dignitaries who visit Jerusalem’s Old City do so in an entirely private capacity, with no Israeli diplomats by their side.

But since Trump’s visit to the Wall, his December 6, 2017, recognition of Jerusalem as Israel’s capital, and the May 14, 2018, move of the US embassy there, this hitherto ironclad rule has slowly but surely crumbled.

In recent months, more foreign dignitaries than ever before have visited the Jewish holy site, and many of them no longer mind being chaperoned there by Israeli diplomats.

“A lot of the inhibitions that might have existed in the past have been dropped. It’s pretty clear to many in the international community that the area of the Wall, if not the whole city, will remain in Israel’s hands in any future peace arrangement,” said Dore Gold, a former Foreign Ministry director-general. 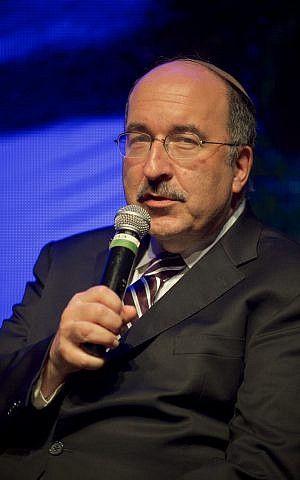 While some Western diplomats have tried to resurrect the century-old idea of Jerusalem as corpus separatum — wanting to internationalize the city — many others understand that it is completely unrealistic, according to Gold, who heads the Jerusalem Center for Public Affairs, a right-leaning think tank.

To be sure, many Western European diplomats still insist on the “antiquated formulae” on Jerusalem, he acknowledged. “But from private conversations you get the impression that there is a growing understanding that Jerusalem is not going to be divided.”

According to standard diplomatic protocol, foreign dignitaries who choose to visit the Western Wall privately are welcomed there by Rabbi Shmuel Rabinovitch but are not joined by high-ranking diplomats. Rabinovitch is an employee of the Western Wall Heritage Foundation, a governmental agency founded in 1988 by the Religious Affairs Ministry.

Of course, foreign VIPs are surrounded by Israeli security personnel — who in 1996 acted so rudely that French president Jacques Chirac threatened to abort his Israel visit and fly back to Paris — and by lower-ranking diplomats in charge of protocol.

According to Foreign Ministry spokesperson Emmanuel Nahshon, this is still the standard procedure. “There is no change in policy,” he told The Times of Israel, adding that “adjustments” are made either based on a country’s policy changes or the visitor’s scheduling needs. 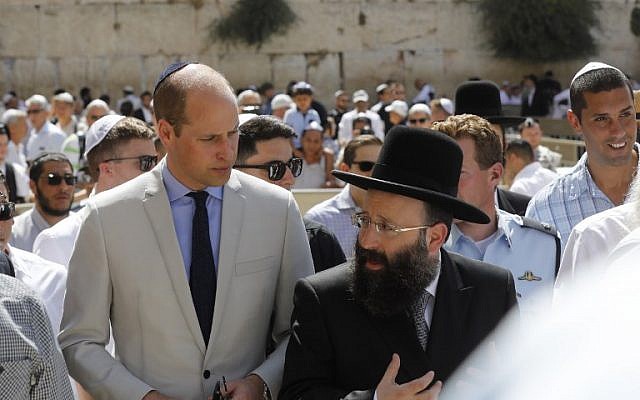 But about a dozen officials and analysts interviewed for this article said they observed in recent months that more and more visiting officeholders tour the Wall together with the Israeli envoys to their respective countries.

Unsurprisingly, the American administration has taken the lead in advancing this trend.

On December 6, 2018 — the one-year anniversary of Trump’s Jerusalem declaration — US Ambassador David Friedman held a Hanukkah candle-lighting ceremony at the holy site, that was attended by Prime Minister Benjamin Netanyahu. 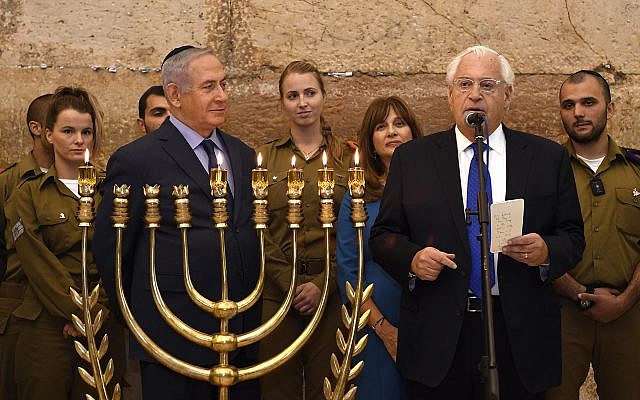 US Ambassador to Israel David Friedman, second right, and his wife Tammy, third right, join Prime Minister Benjamin Netanyahu, front left, at Jerusalem’s Western Wall for a candle-lighting ceremony marking the fifth night of Hanukkah and one year since US President Donald Trump’s December 6, 2017, declaration on moving the US Embassy to Jerusalem. (Matty Stern/US Embassy Jerusalem)

The significance of the moment was not lost on Friedman. In his speech, he noted that this may even be the first time an Israeli prime minister has visited the religious site with a senior US official.

“I hope it’s the first of many more such occasions,” he said.

Exactly one month later, Friedman took visiting US National Security Advisor John Bolton to the Wall and on a tour of the tunnels and the visitor’s center near the holy site. During the entire stay, they were joined by Bolton’s Israeli counterpart, Meir Ben-Shabbat; Netanyahu’s chief foreign policy adviser Reuven Azar; and Israel’s Ambassador to Washington Ron Dermer.

“This behavior will not change the fact that East Jerusalem is occupied territory and the capital of the state of Palestine,” Saeb Erekat, the secretary-general of the Palestine Liberation Organization, fumed at the time, arguing that such visits undermine international law and “lead to lawlessness.”

On Thursday afternoon, US Secretary of State Mike Pompeo became the highest-ranking official to tour the site with Israel’s prime minister. 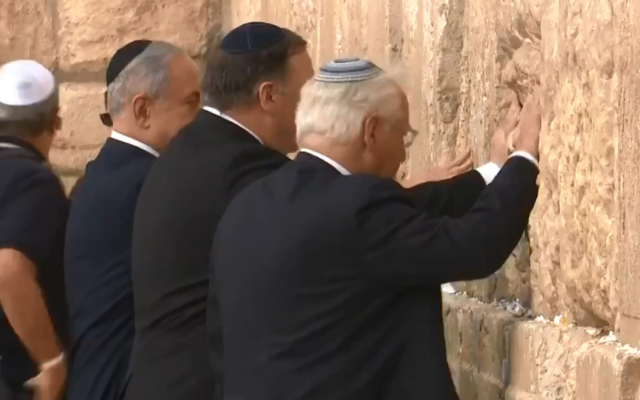 Pompeo and Netanyahu visited the Wall itself, and then toured the surrounding tunnels, which are located underneath the Old City’s Muslim Quarter. At a visitors center, the two men viewed a virtual reality recreation of the Jewish temple that once stood on the Temple Mount.

It’s also the Czech, the Ukrainians, the Liberians…

But it’s not only the Americans. Czech Foreign Minister Tomáš Petříček last November went to the Western Wall together with Israel’s ambassador in Prague, Daniel Meron. The significance of his unprecedented step was played up by the Israelis and condemned by Palestinian officials.

“The Czech Foreign Minister made history as he became the first European minister to come to the Wall accompanied by an Israeli ambassador,” Deputy Foreign Minister Tzipi Hotovely cheered at the time.

Erekat, on the other hand, bitterly noted that Petříček had violated the principle of “non-recognition of unlawful situations, including Israel’s illegal annexation of Jerusalem.”

Since then, the presidents of Ukraine and Liberia were also joined at the Wall by the Israeli envoys to their respective countries. Other foreign dignitaries have followed suit. 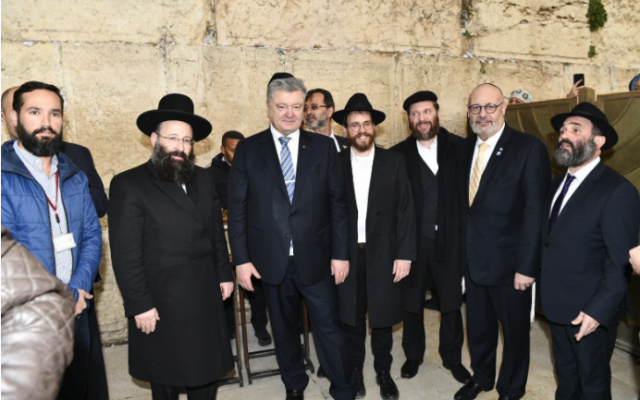 The Palestinians aren’t the only ones displeased with this trend. “We are quite aware of this, and yes, we are concerned about it,” a diplomat from a Western European country told The Times of Israel, speaking on condition of anonymity.

The European Union unequivocally rejects Israel’s claim to East Jerusalem, and therefore representatives from member states are urged to refrain from being seen there with high-ranking Israeli officials, the diplomat explained.

How widespread this phenomenon has become remains unclear, as no one is keeping track of how many foreign dignitaries visit the site and how many are escorted by Israeli officials. 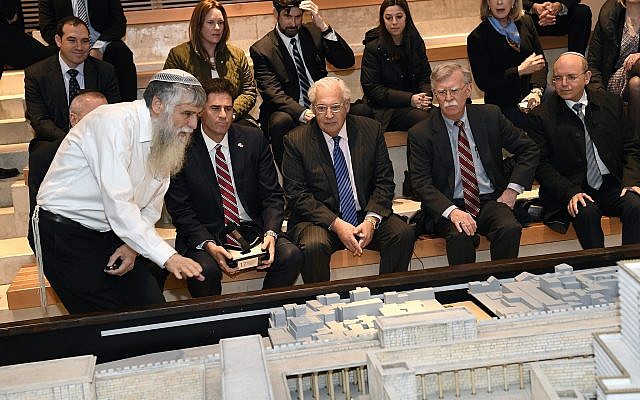 “Dignitaries from all over the world have always come to the Western Wall, we host dozens of visits every years… We can say that it increases from year to year,” said Yohanna Bisraor, a spokesperson for the Western Wall Heritage Foundation. But she declined to comment on the trend of foreign officials being accompanied by Israeli diplomats. “We at the kotel are prepared to welcome every visit,” she said, using the Hebrew term for the holy site.

What is behind this new trend?

According to Hotovely, Israel’s hawkish deputy foreign minister, the shift has a lot to do with her instructions to the ministry’s visitors department.

“When I came to the ministry, the situation was very problematic. Many delegations wanted only private tours in the Old City and did not agree to be accompanied by our diplomats. But we insisted, and after some time we saw a certain degree of success,” she told The Times of Israel.

Since Israel considers itself the sovereign in Jerusalem’s Old City, every visitor needs an official escort, she added. “And there is more readiness for this today. We almost never see that people refuse.”

A European diplomat, however, told The Times of Israel that his embassy has never been pressured to agree to have visiting dignitaries be chaperoned by Israeli officials.

Most experts interviewed for this article pointed at the change in US policy. Other states may not have agreed with Trump’s decision to recognize Jerusalem as Israel’s capital. But once the world’s only superpower was no longer afraid to be seen at the Western Wall with Israeli officials, they didn’t feel the need to worry about it, either.

Daniel Seidemann, a longtime analyst of the politics of Jerusalem, whose expertise on the matter is frequently sought by foreign embassies, offered two additional explanations for the trend.

For one, some governments dislike the various UNESCO resolutions that deny Israel’s claims to the Holy City, and a good way to show recognition of the deep Jewish connection to Jerusalem is by visiting the Western Wall, he posited. 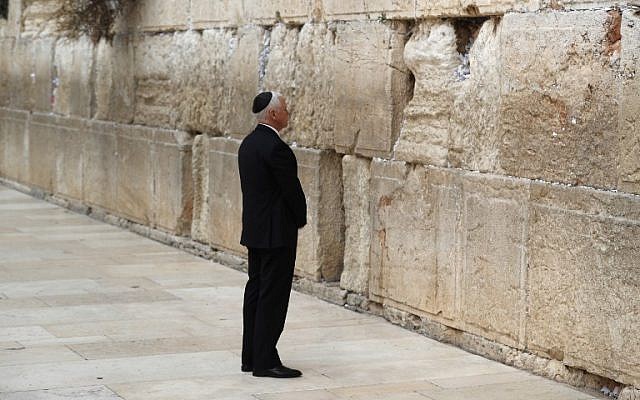 Doing so with an Israeli escort is “sort of moving the embassy-‘lite,’” Seidemann said. “There are open and hidden pressures for other countries to move their embassies. They’re not doing it. I tend to think that certain countries in the EU would do it, were they not mercilessly pressured into holding ranks on this issues… They’re finding alternatives, like opening a cultural center or a trade office,” he said.

Going to the Wall with official accompaniment is another “non-controversial response” to Israel’s pressure on recognizing Jerusalem as its capital, he said.

Trump’s unprecedented visit to the Wall — George H.W. Bush, Bill Clinton, George W. Bush and Barack Obama went to the site, too, but either before or after their tenures as president — started a process that peaked with the opening of the embassy but continues to have an afterlife.

So far, only one other country — Guatemala — has followed the American administration’s lead and moved its embassy to Jerusalem.

But Trump’s actions have uprooted a lot of deeply entrenched policies, according to Gold, the former Israeli top diplomat.

“The whole question of Jerusalem in the international community is very much in flux,” he said, “whereas previously it seemed to be locked in.”