by Lanai Scarr and Annabel Hennessy

Another Labor MP has been embroiled in the Israeli-Palestinian division within the party.

Video has emerged of western Sydney MP Susan Templeman likening the situation in the West Bank to apartheid.

Ms Templeman, who holds her electorate on a margin of 2.2 per cent, said that “essentially there is an apartheid happening” in the Middle East. 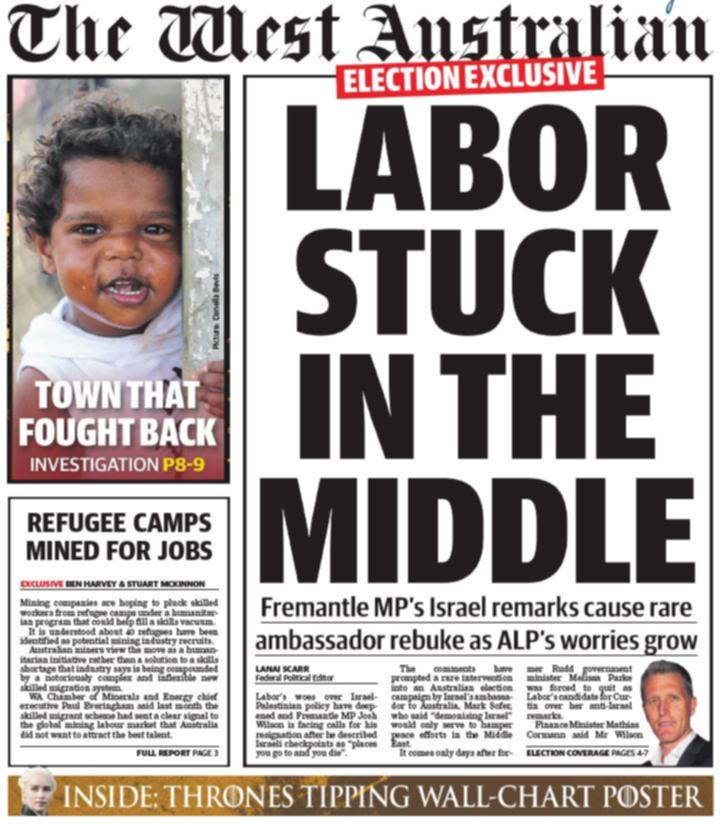 “Depending on if you are Israeli or Palestinian you use different roads,” she said. “You have different opportunities in life dictated on whether you are Palestinian or Israeli.”

Ms Templeman made the comments at the same event on the sidelines of the ALP national conference last December where Fremantle MP Josh Wilson made his anti-Israeli remarks as reported by The West Australian yesterday.

Mr Shorten and Labor insiders are scrambling to control the issue.

“Josh has said very clearly that he supports Labor policy which is for a two-state solution for Israel and Palestine,” Mr Shorten said.

“I support Labor’s policy of a two-state solution, which recognises the right of Israel and Palestine to exist within secure and recognised borders,” she said.

Labor’s campaign has been thrown into chaos over the issue after former Rudd government minister Melissa Parke’s exit as the candidate for Curtin.

At a Labor friends of Palestine event last month, Ms Parke said the way Israel treated Palestinians was “worse than the South African system of apartheid” and claimed a pregnant Palestinian refugee was forced to drink bleach.

Ms Plibersek has since said she stands by Labor’s two-state policy.

Former Australian ambassador to Israel and Liberal candidate for Wentworth Dave Sharma said Australia risked damaging international relations with not just Israel but also the US unless this issue was resolved.

“This is not something the US would look very favourably on,” Mr Sharma said.