Labour peers tell Corbyn: you have failed test of leadership

Published Wednesday July 17, 2019
from The Guardian 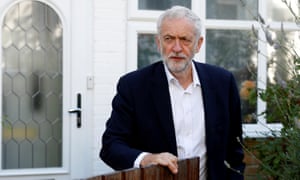 Labour peers have taken out an advert in the Guardian addressed to Jeremy Corbyn. Photograph: Peter Nicholls/Reuters

More than sixty Labour peers have taken out an advertisement accusing Jeremy Corbyn of having “failed the test of leadership” over his handling of antisemitism complaints within the party.

The peers, including more than a dozen former ministers such as Peter Hain, Beverley Hughes and John Reid, have addressed the advert in the Guardian to Corbyn directly, saying: “The Labour party welcomes everyone* irrespective of race, creed, age, gender identity, or sexual orientation. (*except, it seems, Jews). This is your legacy, Mr Corbyn.”

Representing about a third of Labour’s members in the House of Lords, the signatories told Corbyn the party was “no longer a safe place for all members” and claimed that thousands have resigned their membership “because of the toxic culture you have allowed to divide our movement”.

The advert has been taken out amid a backlash within the party about the leadership’s response to a BBC Panorama documentary that aired last week, in which eight former staff members accused the Labour of failing to tackle complaints about antisemitism properly and allowing Corbyn’s office to get involved in disputes.

Labour strongly denied any interference by the leader’s office, complained to the BBC and said the claims were made by “disaffected former officials including those who have always opposed Jeremy Corbyn’s leadership, worked to actively undermine it, and have both personal and political axes to grind”.

In the advert, the 64 Labour peers state that Corbyn has not opened his eyes, taken responsibility or told the whole truth when it came to acknowledging the scale of complaints about antisemitism afflicting the party.

“We are not asking if you are an antisemite. We are saying you are accountable as leader for allowing antisemitism to grow in our party and presiding over the most shaming period in Labour’s history,” they said.

The message to Corbyn in the advert said: “It’s the style of your office and your followers to deny the truth of the message and shoot the messengers, whether they are party members or whistleblowers from Labour’s head office. But we cannot stay silent while younger, braver party workers and members speak out.

“You have failed to defend our party’s anti-racist values. You have therefore failed the test of leadership.”

One of the signatories, Clive Soley, a former chair of the parliamentary Labour party, said the advert was necessary because the future of the party is in peril.

“I think the situation is that we either do something now or just watch the the Labour party die. It is that tragic,” he said. “If you look at it historically, the Liberal party took two general elections to die as an electoral force. This could happen to us. The party is haemorrhaging support dramatically and its very hard to see how we stop that with Jeremy and his group leading the party.”

Peter Hain, a former cabinet minister, said he had signed the letter criticising Corbyn over antisemitism complaints within Labour because he was a lifelong antiapartheid and antiracism campaigner and someone who had supported the Palestinian cause since the 1970s.

“I’m astonished Jeremy Corbyn has not sorted this out before and I’m astonished he doesn’t seem to understand how terrible this is for him personally let alone for the whole party,” he said.

Responding to the advert, a Labour party spokesman said Corbyn and the Labour party “stand in solidarity with Jewish people and are fully committed to the support, defence and celebration of the Jewish community”.

The spokesman said Labour was taking decisive action against antisemitism “regardless of false and misleading claims about the party by those hostile to Jeremy Corbyn’s politics”.

“Jeremy Corbyn has made clear in interviews, videos and articles that there is no place for antisemitism in the party,” he added.

“Jennie Formby [the general secretary] has sped up and strengthened procedures and the rate at which cases are dealt with has increased more than four-fold. Since September 2015, the number of cases that have undergone disciplinary procedures relate to about 0.06% of members.

“The Labour party’s comprehensive rebuttal of the Panorama programme did not in any way criticise Jewish members who have suffered antisemitism. As we said after the programme aired, we will fully investigate any complaints alleging antisemitic incidents reported by party members in interviews in the programme.”

The 64 peers are the latest group to put pressure on the Labour leader over the party’s handling of antisemitism complaints. Labour is to hold an extraordinary shadow cabinet meeting next Monday to address concerns on antisemitism and Corbyn will address MPs on the issue on the same day.

On Monday, more than 200 former and current staff challenged him to resign if he could not renew trust in Labour party’s dealings with employees. Separately, four senior Labour peers, including Angela Smith, the party’s leader in the Lords, offered to find peers to give advice on overhauling its antisemitism complaints procedures.

Pressure is also coming from Tom Watson, the deputy Labour leader, who on Tuesday backed a new motion which would automatically exclude members accused of racism, sexism, misogyny, homophobia or transphobia in what would be a radical overhaul of the party’s complaints process.

The auto-exclusion would apply where there is “irrefutable evidence” of discrimination and would be overseen by an independent appointee, according to the motion, which will be debated at next week’s full meeting of the national executive committee (NEC).

The motion was signed by Watson, and four members of the national executive committee – MP George Howarth, councillors Alice Perry and Nick Forbes and the societies representative, James Asser.