On March 11, 2011, two Palestinian teenagers, aged 17 and 19, brutally murdered Ruti and Udi Fogel and three of their children, Yoav, Elad and baby Hadas.

As part of its “Pay-for-Slay” terror reward policy, the PA has been paying the murderers of the Fogel family a monthly salary since the day they were arrested. As part of this policy, to date, the PA has already paid each one of the murderers 338,400 shekels ($101,847).

According to the 2004 PA Law of Prisoners and Released Prisoners and its implementing regulations, the salary the PA pays to all terrorist prisoners rises with time spent in prison: 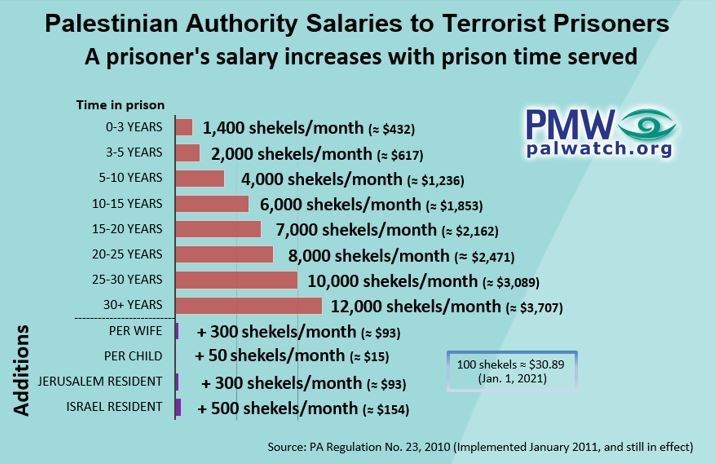 Days after the murder, Palestinian Media Watch exposed the PA incitement immediately prior to the attack.

A month after the attack, a survey conducted jointly by the Harry S. Truman Research Institute for the Advancement of Peace at the Hebrew University of Jerusalem and the Palestinian Center for Policy and Survey Research in Ramallah showed that while two thirds of those surveyed opposed the attack, the remaining third supported the attack.

As PMW recently exposed, in 2020, despite the Covid-19 crisis, the PA spent no less than 512 million shekels ($159 million) paying financial rewards to terrorist prisoners –including the Fogel murderers - and released prisoners. In addition, the PA also paid hundreds of millions of shekels in rewards to wounded terrorists and the families of dead terrorists.

Hakim Awad and Amjad Awad - 17 and 19-year-old Palestinian terrorists who brutally murdered 5 members of the Fogel family. The terrorists snuck into the Fogel's home in the town of Itamar, southeast of Nablus, on March 11, 2011, and first murdered the 11 and 4-year-old children as they slept, and then murdered the parents, Ehud and Ruth, who struggled with them. The terrorists then left the home, but Amjad decided to return and look for weapons. When he returned, he heard the four-month-old baby crying and murdered her. Hakim and Amjad Awad returned to their village after the attack. They were caught and arrested by Israel Secret Service, army and police forces over a month later, on the fifth and tenth of April. Hakim Awad was sentenced to five life sentences and an additional 50 years imprisonment, and Amjad Awad was sentenced to five life sentences and an additional seven years imprisonment.