In a devastating attack, Rabbi Ephraim Mirvis accuses party leader of being “complicit in prejudice,” adding: "It's a failure to see this as a human problem" 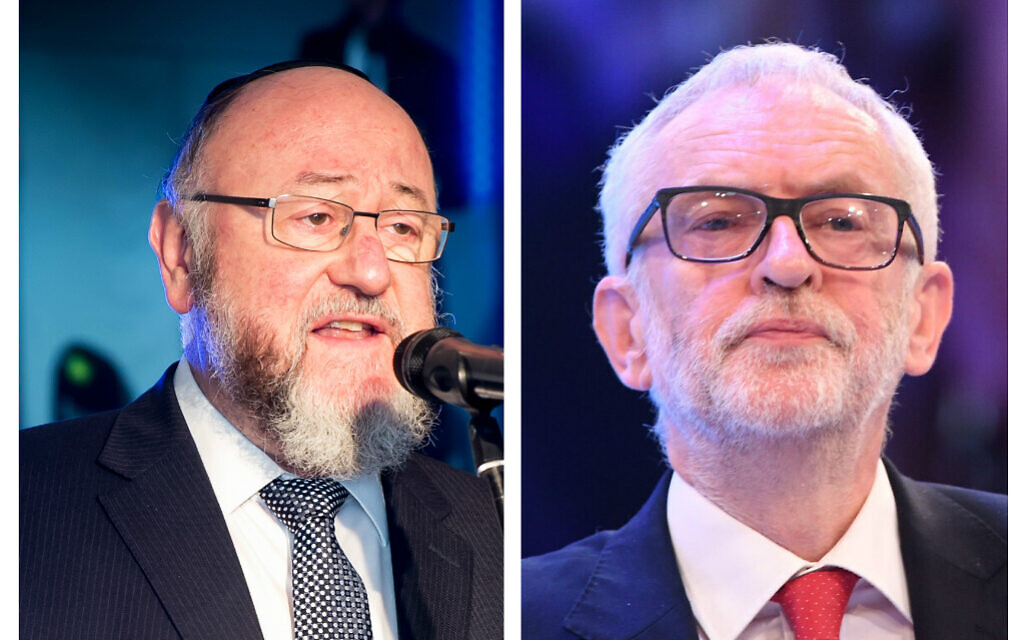 Chief Rabbi Ephraim Mirvis has launched a scathing attack on Jeremy Corbyn, accusing him of being “complicit in prejudice,” adding that Labour “can no longer claim to be the party of diversity, equality and anti-racism…"

Chief Rabbi Ephraim Mirvis has accused Jeremy Corbyn and his allies of “sanctioning a new poison” in the Labour party.

Writing in The Times today, Mirvis made the comments just two weeks before Britons vote in the general election.

Writing “with a heavy heart,” Mirvis accused Corbyn of being “complicit in prejudice,” adding that Labour “can no longer claim to be the party of diversity, equality and anti-racism… This is the Labour Party in name only”.

Mirvis said “the overwhelming majority of British Jews are gripped by anxiety” at the prospect of Corbyn becoming prime minister, and argued that the problem was one of culture, rather than process.

“The party leadership have never understood that their failure is not just one of procedure, which can be remedied with additional staff or new processes. It is a failure to see this as a human problem rather than a political one,” said Mirvis.

Mirvis acknowledged that a Chief Rabbi should stay out of party politics, but countered that “challenging racism in all its forms is not a matter of politics, it goes well beyond that”.

He said Corbyn’s assertion during an ITV debate that Labour had investigated all outstanding cases was a “mendacious fiction,” before asking: “What will become of Jews and Judaism in Britain if the Labour Party forms the next government? This anxiety is understandable and justified.”

He added that “raising concerns about anti-Jewish racism in the context of a general election ranks amongst the most painful moments I have experienced since taking office,” saying he did not wish to influence people how to vote but urged them to “vote with their conscience”.

It is the first time Mirvis has written a piece attacking Corbyn and Labour over antisemitism, although he has made his views known before. May 2016, he accused Labour of “political posturing and empty promises” and in August 2016, he accused the Labour leader of making “offensive” comments at the launch of Shami Chakrabarti’s report into antisemitism in the party.

In 2018, he said Corbyn had shown “contempt” for British Jews by not adopting a new definition of antisemitism, and in January of this year, he told BBC Radio 5 Live he was “still waiting to see” Labour taking antisemitism “seriously enough”.

In July, following a BBC Panorama programme, he tweeted: “This is no longer a question of the leadership’s inability to deal with… antisemitism, but of its direct complicity in it. The cloud of hatred and acrimony that this creates must be lifted.”