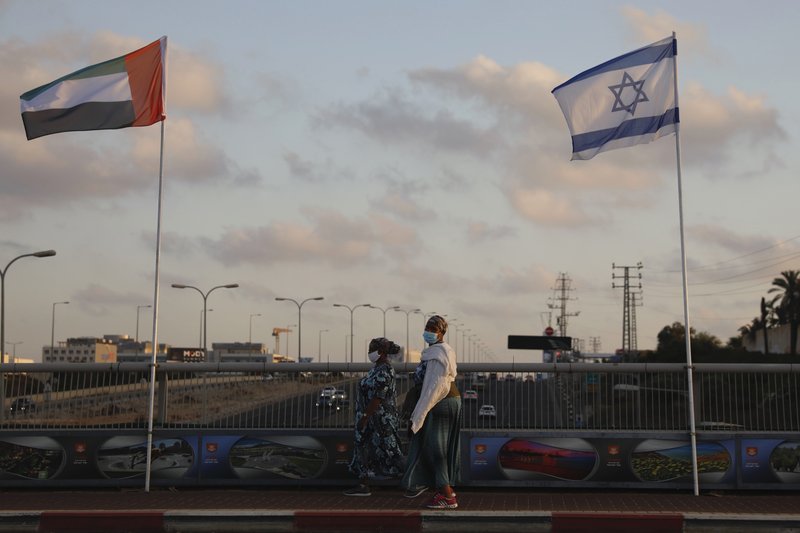 The announcement now allows trade and commerce between the UAE, home to oil-rich Abu Dhabi and skyscraper-studded Dubai, and Israel, home to a thriving diamond trade, pharmaceutical companies and tech start-ups.

The announcement further cements the Aug 13 deal opening up relations between the two nations, which required Israel to halt its contentious plan to annex occupied West Bank land sought by the Palestinians. But Palestinians so far have criticized the accord as undercutting one of its few bargaining chips with Israelis in moribund peace negotiations.

The state-run WAM news agency said the decree formally ending the boycott came on the orders of Sheikh Khalifa bin Zayed Al Nahyan, the ruler of Abu Dhabi and the Emirates’ leader.

WAM said the new decree allows Israelis and Israeli firms to do business in the UAE, a U.S.-allied federation of seven sheikhdoms on the Arabian Peninsula. It also allows for the purchase and trade of Israeli goods.

“The decree of the new law comes within the UAE’s efforts to expand diplomatic and commercial cooperation with Israel,” WAM said. It lays out “a road map toward launching joint cooperation, leading to bilateral relations by stimulating economic growth and promoting technological innovation.”

Israeli Prime Minister Benjamin Netanyahu welcomed the decree. “This is an important step toward advancing peace and prosperity in the region,” he said.

Israeli Foreign Minister Gabi Ashkenazi said in a statement the UAE decision “is an important step towards peace, which will yield substantial economic and commercial achievements for both people while strengthening the stability in the region.”

Already, some Israeli firms had signed deals with Emirati counterparts. But the repeal of the law widens the likelihood of other joint ventures, such as in aviation or in banking and finance.

Dubai International Airport, home to the long-haul carrier Emirates, has been the world’s busiest for international travel for years. The Dubai International Financial Center also hosts major firms who trade in the hours between Asian and European markets. Dubai already has a major gold market and growing diamond trade.

On Monday, the first direct commercial flight by Israel’s flagship carrier El Al is expected in Abu Dhabi, carrying U.S. and Israeli officials including President Donald Trump’s son-in-law, Jared Kushner. Telephone calls already can be made between the nations.

The decree formally eliminates a 1972 law on the UAE’s books since just after the country’s formation. That law mirrored the widely held stance by Arab nations at that time that recognition of Israel would only come after the Palestinians had an independent state of their own.

Hanan Ashrawi, a senior Palestinian official, criticized the UAE’s decree Saturday as undercutting the efforts of the Boycott, Divest and Sanctions movement targeting Israel. Israel has accused BDS activists of seeking to delegitimize its existence.

“While (hashtag)BDS is proving to be an effective tool of peaceful resistance & responsible, ethical investment & consumer responsibility to hold Israel to account, this happens!” Ashrawi wrote on Twitter.

Hamas, the Islamic militant group governing the Gaza Strip since seizing it in 2007, has reiterated its rejection of the UAE-Israel deal and the ending of the boycott.

The decree “boosts the normalization with the Israeli occupation and legitimizes it on the Palestinian land,” Hamas official Bassem Naim said.

The decree shows the UAE’s eagerness to advance ties and maximize its potential benefits such as trade amid an economic slowdown, said Elham Fakhro, the senior Gulf analyst at the International Crisis Group.

“The decision sends a clear message that the UAE is committed to its decision to normalize relations with Israel,” Fakhro said. “It does also raise questions about possible repercussions for anyone in the country calling for the boycott of Israeli goods, now that doing so contradicts the state policy.”

The UAE is becoming the third Arab nation after Egypt and Jordan to currently have diplomatic relations with Israel. However, while widespread public distrust of Israel persists in those nations, the UAE never fought a war against Israel, nor did it have a historic Jewish population.

In recent years, the UAE has held quiet talks with Israel and allowed Israelis with second passports into the country for trade and talks. Opening ties may also help the Emirates access advanced American weaponry, like the F-35 fighter jet that right now only Israel flies in the Mideast.

Sheikh Khalifa has ruled the UAE since 2004. He suffered a stroke on Jan. 24, 2014, and underwent emergency surgery. He has been rarely seen since in public, though state media typically publishes images of him around Islamic holidays.

Abu Dhabi’s crown prince, Sheikh Mohammed bin Zayed Al Nahyan, has served as the UAE’s day-to-day ruler since Sheikh Khalifa’s stroke. Sheikh Mohammed has focused on increasing the Emirates’ military might amid his suspicions of Iran — an enmity shared by Israel.

While Sheikh Khalifa holds the title of president, the UAE is governed by autocratic sheikhs. Abu Dhabi, as the country’s oil-rich capital, has grown increasingly powerful since the UAE’s founding in 1971 despite each sheikhdom largely governing its own affairs.

The decree comes after a trip through the Mideast in recent days by U.S. Secretary of State Mike Pompeo, who hoped to build on the UAE-Israel deal.

The accord also came as a major foreign policy win to Trump as he campaigns ahead of the November election against Democratic candidate Joe Biden. Both Israel and the UAE have viewed the Republican president as an ally.