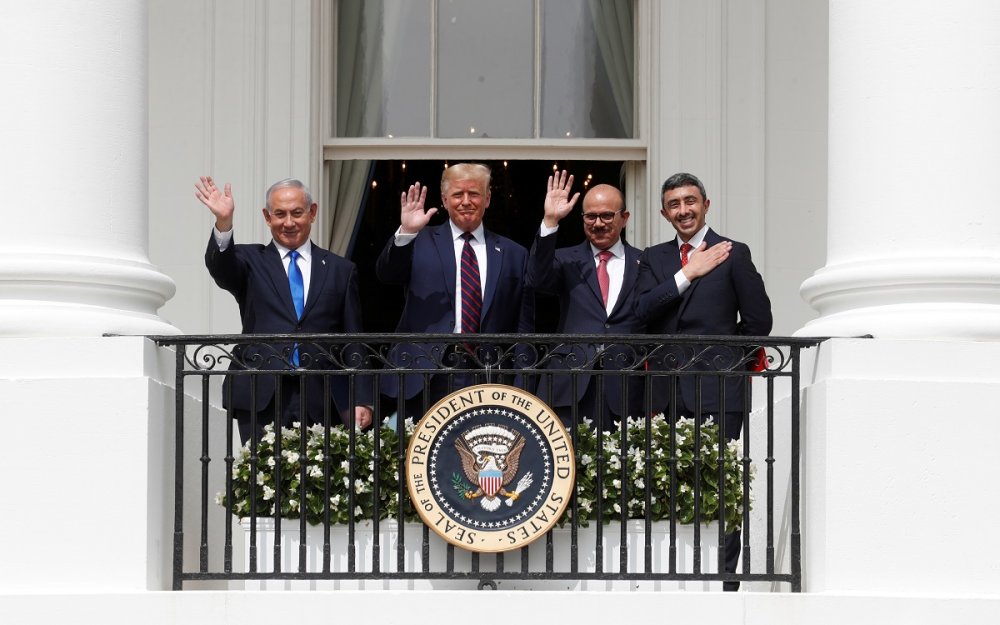 From the author: The imminent establishment of diplomatic relations between Israel and two Gulf states, the United Arab Emirates and Bahrain, is part of an on-going process of security cooperation going back many years. While that robs the event of some drama, it also increases its significance. It means that the process of ending the era of Arab-Israeli confrontation will continue, culminating perhaps in a political upheaval in Iran. That is the road that the Middle East may now be on.

The imminent establishment of diplomatic relations between Israel and two Gulf states, the United Arab Emirates and Bahrain, is part of an on-going process of security cooperation going back many years. While that robs the event of some drama, it also increases its significance. It means that the process of ending the era of Arab-Israeli confrontation will continue, culminating perhaps in a political upheaval in Iran. That is the road that the Middle East may now be on.

Sudan, Saudi Arabia, Oman, and Kuwait are some of the Arab countries reported to be considering peace deals with Israel. One or two of those countries may hold back, and Saudi Arabia, while supporting the process of regional normalization with Israel, may officially withhold formal recognition. It doesn’t matter. Even without official ties, all these countries have in a spiritual sense ended their hostility to the Jewish state.

Now look at the map:

The Israel-UAE alliance enjoys virtually unimpeded naval access around the three sides of the Arabian Peninsula: the Red Sea, the Arabian Sea, and the Persian Gulf, with only tiny Qatar and the war-torn and chaotic state of Yemen presenting somewhat of a challenge. Meanwhile, the growing military presence of China in Djibouti and potentially in Port Sudan will remain a neutral element regarding this new Arab-Israeli security condominium, which will go far beyond the naval sphere and embrace high-tech security and warfare in all its aspects.

The Middle East is in the complicated process of transformation. For decades since the 1960s, the Baathist totalitarian regimes in Syria and Iraq had organized the rejection front against Israel. But those states, along with radical Libya, are now utterly shattered, even as Egypt lies impotent beneath debilitating repression and economic mayhem. The Palestinians, Qatar, and Shiite elements in Lebanon are all that’s left of the Arab rejection front, which now has to rely on support from non-Arab Turkey and Iran.

Of those two, Iran may be the more fragile. Whereas Turkey’s neo-authoritarian leader Recep Tayyip Erdogan still operates in a partially democratic framework of rival political parties, as well as of independent mayors and journalists, Ayatollah Ali Khamenei’s regime in Iran constitutes a radical theocracy that is far more unpopular than is Erdogan’s in Turkey. Moreover, Iran’s regime, unlike Turkey’s, is tied to the price of hydrocarbons which has been in general decline (and that is not to mention the U. S. imposed sanctions), even as the recent Arab peace accords with Israel specifically threaten Iran’s foothold on the Gulf. Finally, Turkey for reasons of geography, culture, and twentieth-century history is a quasi-European state with all the stability which that entails, whereas Iran is not.

Massive anti-regime riots swept throughout Iran in late 2019, and this was before the regime’s mishandling of the Covid-19 crisis. Iran’s regime is under increasing political pressure, demonstrably viewed as illegitimate in the eyes of its people. Responding with terrorism and the deployment of proxy armies abroad, as the regime is likely to do, will be more difficult since the Trump Administration’s assassination of the geopolitical and terrorist mastermind Qasem Soleimani early this year.

Lenin famously said, “There are decades where nothing happens, and there are weeks where decades happen.” Essentially nothing has happened in Iran since the 1979 Revolution, and nothing happened between Israel and its Arab neighbors since 1994 when diplomatic relations were established between Israel and Jordan. Then, in a matter of weeks, forces accruing for decades culminated in two peace treaties. One has to wonder whether and when, as part of this process, decades will happen in a matter of weeks in Iran: not right now, but perhaps during the next presidential term in the United States.

In short, the battle for Iranian hearts and minds has commenced in earnest following the new Israel-Arab Gulf alliance, as one development inexorably points to the other. It is the internal dynamic in Iran, a highly educated country of 84 million people, that over the coming years has the power to truly change the region.

Yet despite the dramatic events of this past week, parts of Washington remain in a time warp, attacking “endless wars,” as part of an argument to withdraw from the Middle East altogether. An unnamed senior adviser to presidential candidate Joe Biden, quoted in Foreign Policy, even relegated the region to “a distant fourth” in the order of significance, after Europe, the Indo-Pacific, and Latin America. In fact, the “endless wars” have been in the process of ending for years now, as U. S. troop levels continue to drop from 132,000 to 3,000 in Iraq, from 100,000 to 4,500 in Afghanistan, and with under a thousand in Syria. We are in a new era: one of Arab-Israeli implicit and explicit cooperation, Turkish neo-Ottoman expansion, and Iranian internal crisis, all under the creeping economic shadow of the Chinese, who rather than view the Middle East as “a distant fourth,” increasingly view it as their key puzzle piece, necessary to organically link up their Belt and Road Initiative in Asia and Europe. The Chinese are consequently building ports and military bases, armed by hundreds of billions of dollars in investments, across the region.

This is no time to withdraw from the Middle East or even to think of it as a region unconnected to others. Indeed, the Middle East is an organic part of Eurasia. Therefore, in the next presidential term, it is time for the United States to help expand and consolidate Arab-Israeli peace in order to limit Turkey’s neo-imperialism and further undermine the regime in Iran: all in the spirit of smartly managing China’s rise across the Indo-Pacific.

Robert D. Kaplan holds the Robert Strausz-Hupé Chair in Geopolitics at the Foreign Policy Research Institute. He is the author of 19 books, including “The Good American: The Epic Life of Bob Gersony, the U. S. Government’s Greatest Humanitarian.”