How much did PA spend on terror salaries in 2020?

Since the beginning of 2020, the Palestinian Authority (PA) has been trying to hide the financial record of its payments to the Palestinian terrorist prisoners and released terrorists (together hereinafter “the terrorist prisoners”). In 2018 and 2019, the PA monthly budget performance reports clearly listed the transfer expenditures of the “Ministry of Prisoners’ Affairs,” which was primarily the payments to terrorist prisoners, as 502 and 517 million shekels respectively. In 2020, the budget category of the “Ministry of Prisoners’ Affairs” (later by the PA called the Commission for Detainees’ Affairs) was removed altogether. However, throughout 2020, numerous statements by PA and PLO officials confirmed that the PA continued to pay hundreds of millions of shekels a year in terror rewards. Consequently, it was clear that the PA had decided to pay terrorists in a roundabout way so that there would be no reference to the salaries at all in their budget.

Palestinian Media Watch has examined the PA’s financial reports throughout 2020 and can now report both where the payments are being hidden, and that the amount the PA spent on terrorists salaries in 2020 was no less than 512 million shekels.

Why did the PA make this accounting change in 2020?

As a recipient of international funding, the PA must show full transparency and publicly list all its expenses, whereas the PLO is not accountable to anyone for how it spends its money. The PA wants to prevent the international community from seeing listings like the one below in its “budget performance report” of 2019, which shows 517 million shekels for salaries to terrorist prisoners listed under the “Commission of Detainees’ Affairs”. (Note: the 517 million shekels in the right column are the salaries to terrorists, while the 619 million shekels in the left column is the full budget of the Commission in 2019.)

This is not the first time the PA has tried to hide its expenditure on the salaries to the terrorist prisoners. In 2014, after a series of PMW events in European parliaments and meetings with members of the US Congress exposing the PA’s terror rewards resulted in threats from the donors to cut all funding to the PA, the PA stopped paying salaries to terrorists directly. It closed its Ministry of Prisoners’ Affairs and transferred the terrorist payments to a new PLO Commission of Prisoners' Affairs. At the time, PMW’s report “The PA's billion dollar fraud” exposed the PA’s effort to deceive the world with a cosmetic change concealing its terror payments, which brought condemnation and outrage from the donor countries. 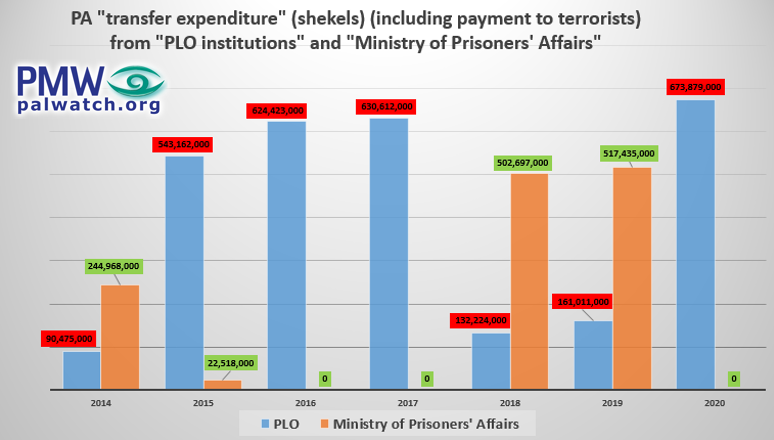 Further proof that the PA payments to the PLO include payments to the terrorist prisoners is seen in the PA budget monthly reports on PLO “transfer expenditures” for 2020.

As the chart below shows, the monthly “transfer expenditures” which include salaries to terrorists were similar from January through November 2020.  However, in December the expenditure suddenly spiked, corresponding to the PA’s announcement that it was paying the salaries of the terrorist prisoners for 3 months. 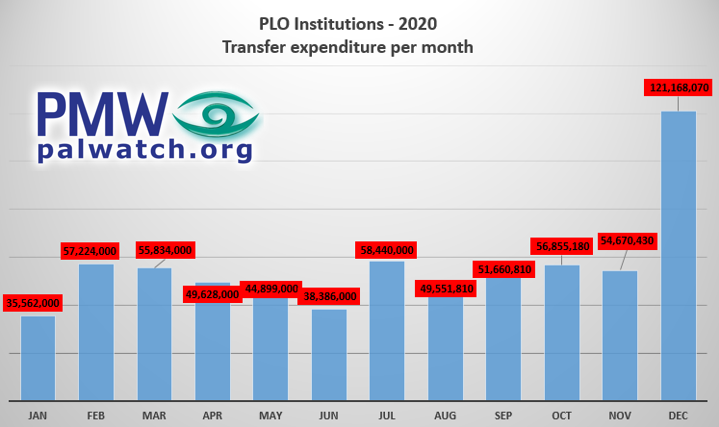 This was necessary because on December 30, 2020, Israeli Anti-Terror legislation came in to force, which, inter alia, prohibited any banking transaction whose purpose is the payment of a reward for an act of terror. This meant that the PA could no longer use the banks operating in the PA for the payment of the terror salaries.

Fearing it would not be able to pay the terrorist prisoners their salaries in the coming months, on December 27, as PMW reported, the PA announced that it would pay the salaries of the terrorists not only for December, but also advance the payments for January and February of 2021. This is reflected in the spike of the transfer expenditure of the PLO institutions in December.

According to the PA budget report, in 2020 the PA transferred over 1 billion shekels to “PLO institutions.” 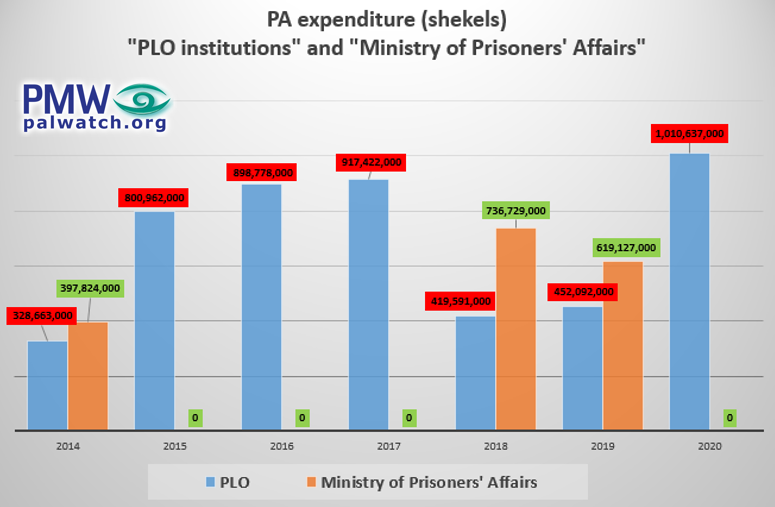 The PA does not report how any of this money was spent by those institutions. The PA’s use of the “PLO institutions” as a means to avoid financial transparency should be a source of concern for all the countries donating to the PA.

First, PMW has already demonstrated that part of the PA’s funding to the “PLO institutions” goes directly to funding US and EU designated terror organizations, such as the Popular Front for the Liberation of Palestine (the organization responsible for the 2019 murder of 17-year-old Israeli Rina Shnerb).

Second, it is unknown which other “institutions” are being funded or why they are funded by the PA.

Third, in 2020 alone, despite the global financial instability brought on by the Covid-19 pandemic, many countries and international bodies such as the EU and the UN responded positively to the PA’s pleas for financial assistance and donated sums equivalent to hundreds of millions of shekels. In years such as these, it is reasonable to expect that the PA’s financial transparency would be at its height. However, PA financial non-transparency was at its height, in 2020. The PA reported that its entire budget expenditure in 2020 was just under 16 billion shekels (See PA budget performance reports). The PA also reporting that over 1 billion shekels went to the “PLO Institutions” means that over 6.25%, of the PA budget was spent by the PA on the non-transparent “PLO institutions”.

It should be noted that PMW writes in this report that the PA payments to the terrorist prisoners was “at least 512 million shekels”, because not all the PA payments to the terrorist prisoners are paid through the PA Ministry/Commission of Prisoners' Affairs and are hidden under different budget lines. According to the PA regulation (paragraph 2(2) of PA Government Decision Number 23 of 2010 "Regarding the Regulation of Payment of the Monthly Salary to the Prisoner") if the terrorist was arrested while employed by PA "Governmental departments, official institutions, and semi-official institutions," those bodies are required to pay the terror salaries of their terrorist employees, while they are in prison. Moreover, the PA funds many other benefits for the terrorist prisoners, released prisoners, wounded, and families of "Martyrs" such as free education, free insurance, free medical care etc. Accordingly, PMW is reporting the PA spent at least 512 million shekels on salaries to terrorists.

If the international community is going to continue funding the PA, it is inexcusable that the donor countries permit the PA to hide such a significant part of its budget under the non-transparent “PLO institutions” listing. The only way the donor countries will know how the PA is spending its donor money is if they demand that in future listings the PA specify in its “expenditure reports“ in detail what the PLO is doing with the money. For example: “PLO transfers to Fatah,” “PLO transfers to PFLP,” “PLO payments of salaries to prisoners,” etc. This is not only necessary in the interest of transparency, but it is critical in order to monitor and eventually stop the PA’s ongoing incentivizing and funding of terror.