by David E. Sanger, William J. Broad and others

Iran released a photograph showing evidence of what appeared to be a major explosion at the site. Early evidence suggests it was most likely an act of sabotage. 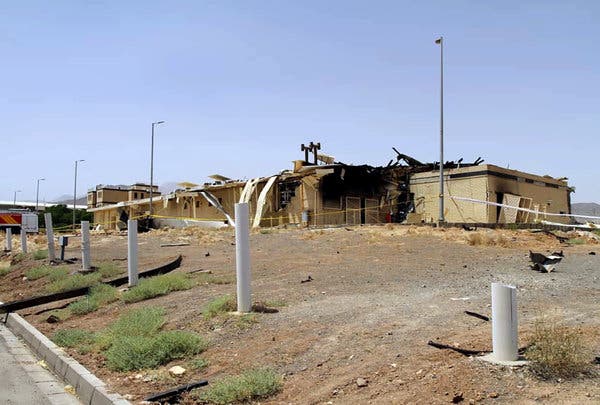 A fire ripped through a building at Iran’s main nuclear-fuel production site early Thursday, causing extensive damage to what appeared to be a factory where the country has boasted of producing a new generation of centrifuges. The United States has repeatedly warned that such machinery could speed Tehran’s path to building nuclear weapons.

The Atomic Energy Agency of Iran acknowledged an “incident” at the desert site, but did not term it sabotage. It released a photograph showing what seemed to be destruction from a major explosion that ripped doors from their hinges and caused the roof to collapse. Parts of the building, which was recently inaugurated, were blackened by fire.

But it was not clear how much damage was done underground, where video released by the Iranian government last year suggested most of the assembly work is conducted on next-generation centrifuges — the machines that purify uranium.

A Middle Eastern intelligence official, who spoke on the condition of anonymity to discuss closely held information, said the blast was caused by an explosive device planted inside the facility. The explosion, he said, destroyed much of the aboveground parts of the facility where new centrifuges — delicate devices that spin at supersonic speeds — are balanced before they are put into operation.

The fire and explosion took place inside the nuclear complex at Natanz, where the Iranian desert gives way to barbed wire, antiaircraft guns and an industrial maze. The damaged building is adjacent to the underground fuel production facilities where, a decade ago, the United States and Israel conducted the most sophisticated cyberattack in modern history, code-named “Olympic Games.” That attack, which lasted for several years, altered the computer code of Iran’s industrial equipment and destroyed about 1,000 centrifuges, setting back Iran’s nuclear program for a year or more.

The early evidence strongly suggested on Thursday the damage was in fact sabotage, though the possibility remained that it was the result of an industrial accident.

The timing was suspicious: A series of unexplained fires have broken out in recent days at other facilities related to the nuclear program. Still, experts noted that if the explosion was deliberately set, it showed none of the stealth and secrecy surrounding the complex cyberattacks by the United States and Israel that were first ordered by President George W. Bush toward the end of his term, and then extended by President Barack Obama.

The Persian language service of the BBC reported that several members of its staff received an email from a previously unknown group, which referred to itself as the Homeland Cheetahs, before news of the fire became public. The group claimed responsibility and said it was composed of dissidents in Iran’s military and security apparatus. They said the attack would target aboveground sections of the targeted facilities so that the Iranian government could not cover up the damage.

There was no way to confirm if Homeland Cheetahs was a real group, and if so whether it was domestic, as it claimed, or supported by a foreign power.

The facility is a key choke point in Iran’s ambitions to speed up its nuclear work, as part of an effort to pressure the United States to suspend the sanctions President Trump has reimposed, and to convince Europe to compensate it for lost revenues as its oil revenue has dried up.

“Iran is also accumulating dangerous knowledge,’’ he said, arguing for an extension of an arms embargo on Tehran that expires in October. “Late last year, Iran announced that its scientists were working on a new centrifuge — the IR-9 — that would allow Tehran to enrich uranium up to 50 times faster than the IR-1 centrifuges allowed" under the Obama-era deal.

David Albright, the president of the Institute for Science and International Security, a nonprofit group in Washington that tracks nuclear proliferation, said in an interview that a number of factors suggested the disaster was most likely an act of sabotage.

The existence of the facility was no secret: The Iranians promoted its opening in June 2018, and Mr. Albright’s institute described the plant in a report. The Iranians ran a glossy picture of it in a report last year.

The assembly plant, Mr. Albright said, was unlikely to have stockpiled the kinds of highly combustible materials that could generate a large explosion. The Iranian images of the plant released last year show the assembly of the centrifuges — tall, thin machines that enrich, or concentrate, uranium’s rare component, uranium 235.

Enriched to around 3 percent, the fuel can be used in nuclear reactors; at 90 percent, it can fuel atom bombs. Iran has insisted that its operations are entirely for civilian purposes, but both American intelligence assessments and a trove of documents stolen by Israel from an Iranian warehouse in January 2018 showed evidence of planning work on nuclear weapons.

The assembly facility “wouldn’t be prone to these kinds of accidents,” Mr. Albright said. “They get subcomponents and put them together. You wouldn’t have a lot of flammable liquids. The assembly operations are not dangerous per se. It seems like it could be sabotage. It’s a high-value site for the Iranians. It’s a very important building.”

The building is assembling a new generation of centrifuges meant to redouble the pace of Iran’s production of atomic fuel. The spokesman for Iran’s Atomic Energy Agency, Behrouz Kamalvandi, said there was an “incident” at one of the aboveground facilities at Natanz and denied reports that there were centrifuges inside the facility. He said the building was empty and there were no casualties and no damage to the environment.

The central role of the factory complex and its importance for the advancement of Iran’s nuclear ambitions, Mr. Albright said, added weight to the idea of an intentional strike. “It’s not a crazy place to hit if you wanted to set the program back,” he said.

Mr. Albright cautioned that the apparent presence at the plant of a diesel-fuel generator for the production of electricity might in theory explain the roots of the explosion, and said the sabotage idea should be treated with skepticism until proven true.

The factory is a ripe target. “It is a new and very important site and it was already operational,” said Fabian Hinz, an expert on Iran’s military and security and a researcher at the James Martin Center for Nonproliferation Studies at Middlebury Institute.

The assembly work on the centrifuges was permitted under the 2015 nuclear accord that Mr. Obama reached with Iran, and that Mr. Trump exited two years ago.

Shortly after Mr. Trump pulled the United States out of the deal, the Iranians announced they were speeding forward with assembling centrifuges at Natanz and released photographs of the facility and some of its staff.

Iran continued to respect the production limits in the deal for more than a year after Mr. Trump’s announcement. But, last year, in an effort to pressure the United States and the Europeans, Iran has begun producing uranium well above limits in the 2015 agreement.

Over the years, the United States and Israel, sometimes with the help of Britain, Germany and other powers, have recruited Iranians to slip information about the nuclear program out of Iran or to sabotage it; a series of assassinations of Iranian scientists a decade ago was later attributed to agents working on behalf of the Mossad, Israel’s spy service.